My Rubric for Measuring Learning in Affinity Spaces

Never been a fan of 21st century skills. Beyond the fact we are a fifth of the way through., the term never resonated. I must admit, I even added to the hype; publishing a set of skills using the latest trope of alliterative “C buzzwords” in a white paper and then a special issue on 21st Century Learning. More so, Ian and I have taken a stab at “measuring” these “soft” skills through research into self-report instruments.

We need to think of 21st Century Skills as practices of pedagogy rather than of performance. Instead of focusing on the learner we need to intentionally design the learning space to cultivate these practices. 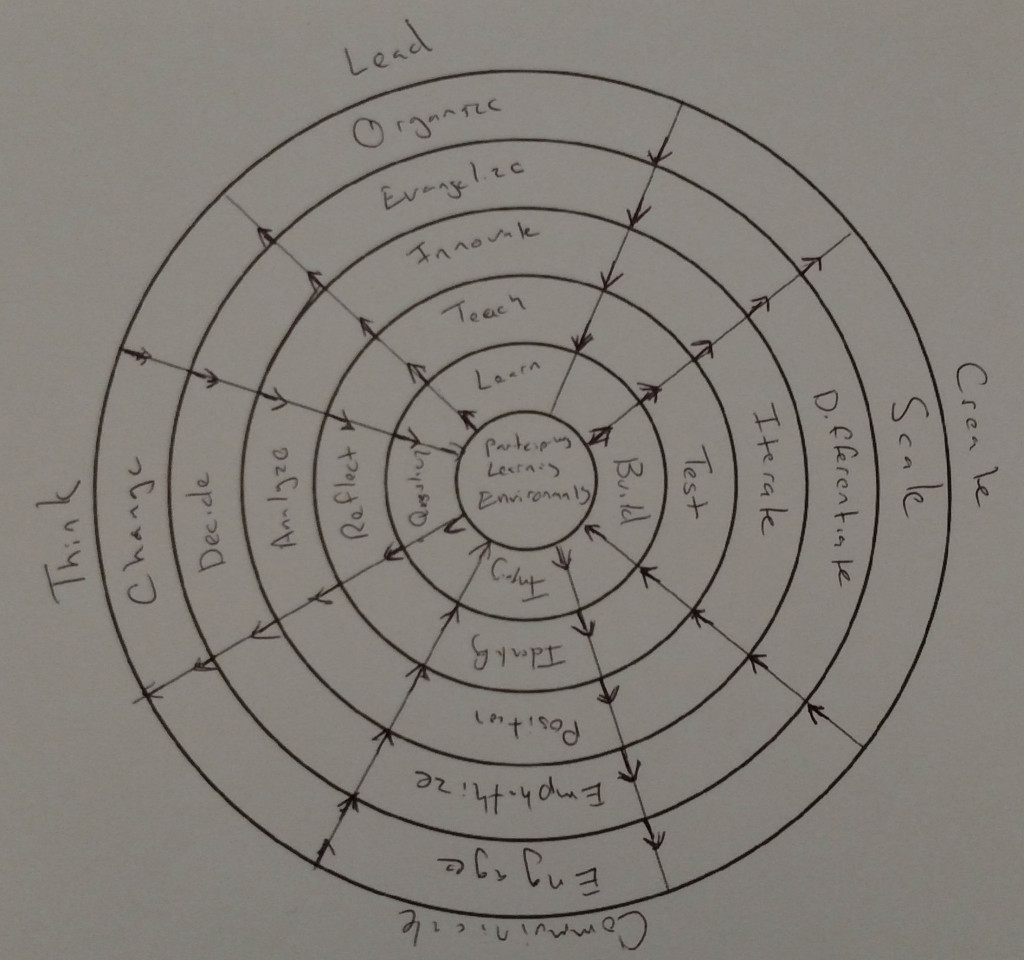 The term “21st” century skills is dated. The Internet has seen more birthday candles than the students who walk the halls of our schools. The web outdates many of the teachers as well. We need to prepare students for the future not catch up to the past.

No. Performing arts are not “soft skills.” #et4online #snarksplaining pic.twitter.com/InblUm2P0b

+many for dropping “hard/soft” skills cliché. Talk to any performing artist about how hard their skill is #et4online https://t.co/GuRpauD7s3 — Alan Levine (@cogdog) April 24, 2015

I settled on: create, communicate, think, lead. I then wanted to start thinking about a map. Actually the thinking about the map started first. It lead me to the four practices found in participatory learning environments.

I was reading an article by Paul Deane on “Rethinking K-12 Writing Assignment” when he discussed competency models as a “detailed map of the skills that should be assessed.”

The infographic is great. So many layers of meaning in so few words. It also “mapped” writing in a way that I had never really seen before.

I was also, of course thinking about the Web Literacy Map and the working group efforts to release a second version of the Map. If you have been following the developments a series of focus group interviews is being conducted. Reading the questions being asked it seemed many people are trying to answer what are “21st Century Skills” we are trying to teach.

I am beginning to wonder if that is the right question. Maybe we should be asking, “What practices should our learning spaces require and reinforce?”

I settled on these four practices because they are essential to self-programmable learning. I dropped collaborate because learning never occurs alone. We are social animals and I believe in many ways our humanity begins when behavior must conflict with instinct. When we run simulations in our mind, delay gratifications, weigh consequences, and consider others we become human.

I then placed a series of practices in concentric circles. I was intentional in my design hoping the practices grew in scope and impact on society.

I then looked around for the types of choices and practices I would want to see in participatory learning environments.

I lifted the entire Create category from an etherpad published by the Web Literacy Working Group. It is cool stuff. Gets at the whole design thinking thing plus puts a focus on making.

The Communicate practices are a mix from the Dean article and writings about rhetoric, reading, and writing.

The Lead category is something new to me. Garnder Campbell sparked my thinking around leadership and learning. The recent focus on leadership in the Mozilla Learning Networks has also honed my though.

In the Think category I dropped critical. Maybe its my natural aversion to totally useless and unnecessary modifiers. I find them redundant and repetitive.

Part of it is just plain confusion. If I can think critically when do I think uncritically? When do I use my dumb thinking skills? Instead critical thinking usually refers to a specific subset of processes and practices. Yet these subset of competencies changes if we are talking Spache’s critical reading or the camp that grew from the Frankfurt school and Friere’s Pedagogy of the Oppressed.

I went with Think. You can Think Different, but just think.

I then played with the idea that each circle represents some level or characteristic of learning. I tried using two dollar words like enculturation. I attempted to sound like the cool kids by using in words like affinity spaces.

Nothing work. So I tried to settle on simple: 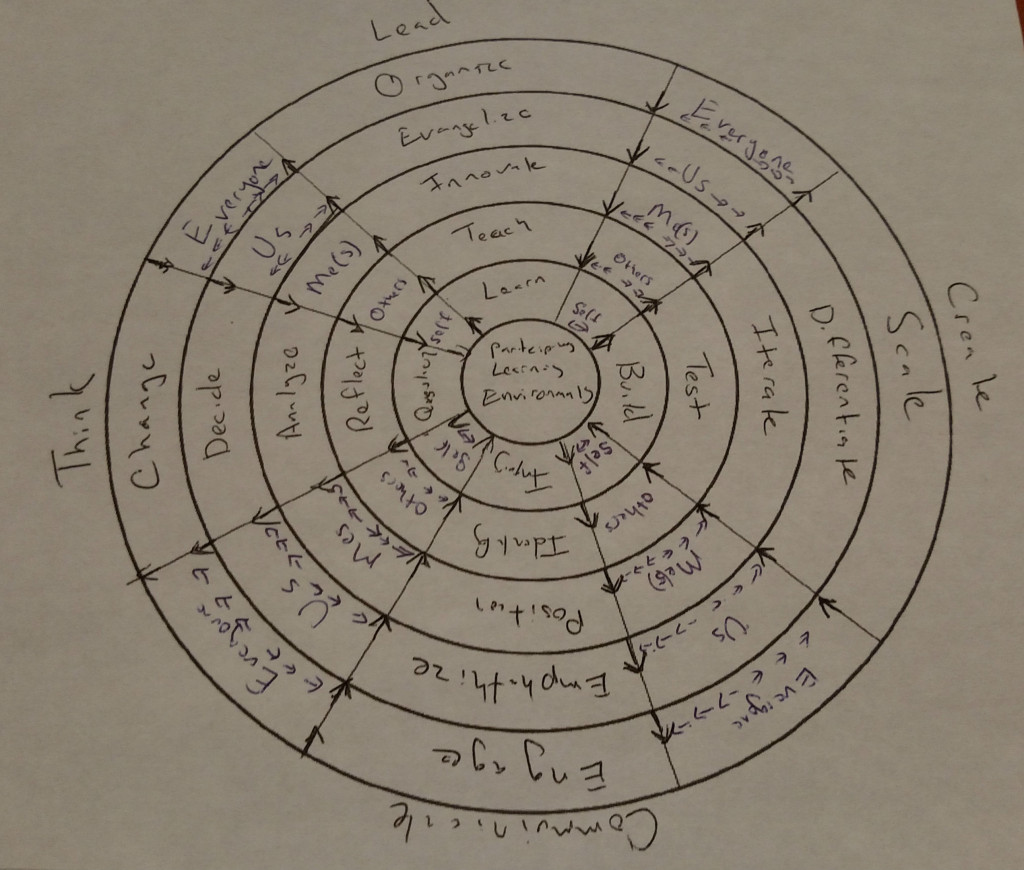 Not sure if this works though. Still I would rather us invest time into ensuring are learning spaces afford the agency for these practices to be built rather than spending time and treasure chasing variance in scores.
✍️ Reply by email This blog's owner has not provided a valid email address yet.